For those following Jean-Paul Gaultier, you are sure to have come across his latest and super cute campaign featuring well-loved cartoon strip characters Popeye the sailor and Betty Boop! I absolutely love it!

I personally love fun references to pop culture especially in cartoons from childhood days. Gaultier is also known as the Enfant Terrible in the French fashion world and is well known for making the famous striped tee or mariner a popular staple item in our everyday closets.

Gaultier has always challenged and redefined the shape and form of the female body through his work in fashion and art. His most famous work would be his redefinition of the corset, which has now become the icon for his brand.You will see him use the corset in many of his perfumes and it has famously featured across his runways, especially after Madonna’s helped gain much attention to his work with her infamous cone bra. For example, the corset was an item that was a part for a women’s underwear. It was not meant to be seen and helped shape her body to an ideal form. Gaultier boldly reverses it by making it outerwear instead and openly accentuating and exploring the female body to celebrated.

During many of his ready-to-wear shows, he would use various friends and celebrities from Beth Ditto, Dita von Teese and Conchita Wurst to model his collections to show his clothes are made for all forms of femininity regardless of gender, size etc. 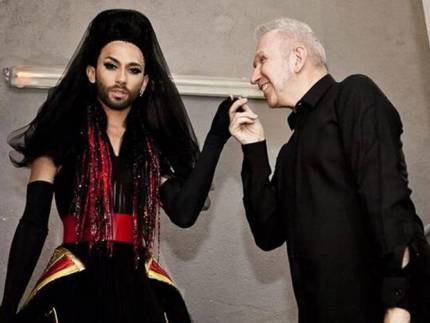 Betty Boop had once caused a stir for her over- sensualised flapper girl image which was
portrayed in 1930s. A baby-like voice and head, with a sexy little body she had no whim about of showing off. In a way she was a rebel for the post-war era as she defies her parents and openly flaunts her sexuality. Popeye simply oozes the stereotypical tough guy with a hint of humour. Two very extreme presentations of masculine and feminine to play with.

Did you know Popeye made an appearance in one of Betty Boop’s cartoons in the 1930s? This is not the first time they make a collaboration. This campaign is to promote Gaultier’s new fragrance to add to his already popular collection. In a previous ad campaign, we see a similar story of a sexy woman wearing a corset in her dressing room as her lover sails through Paris to her balcony. However, this one has humour and fun to it with an upbeat tone.

This campaign is fun and intriguing and I just love the little comic strips. we even see Mr. Gaultier make an appearance in cartoon form in the story. Since Gaultier no longer presents us with ready-to-wear, fun campaigns like these help keep fans intrigued and the brand alive. 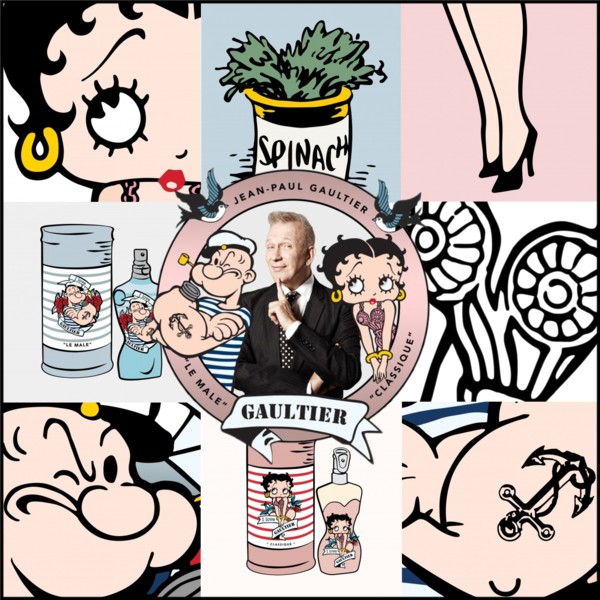