I first learnt of Hello Kitty Café in 2011 on arriving in Korea. I had no idea it even existed and stumbled upon its quaint pink façade while walking the streets of Hongdae. The café concept was small then, they had only really existed within Japan. Since then the characters themed café has grown, and so has the Hello Kitty’s fabulously pink cafes.

Most fashion brands have expanded into becoming lifestyle brands, going beyond the product and offering a service. Character brands are part of fashion and trends for children and a niche market of adults who enjoy kawaii-inspired culture and pop culture enthusiasts.

Building a character in the 1970s and 1980s was all about selling the merchandise such as apparel, toys and accessories after following the cartoon series. Since many of the fans have grown up, they have grown up along their fans, and have had to capture a new generation while they’re at it.

Let’s look at the Hello Kitty Café concept and how it’s growing globally.

The first café in Seoul was hidden in a rather discreet alley way in Hongdae’s busy streets. It was the only all pink building in the area and promoted the Japanese Harajuku sweet style in its beauty parlour/girly café look. It was never busy, only filled with a few Kitty enthusiasts like myself who would frequent it regularly.

The café’s popularity has grown. Many bloggers have been making noise on it and to keep up with the demand and volume of customers coming, the café has moved to much larger premises. In fact, it’s now an actual house with a beautiful front garden! 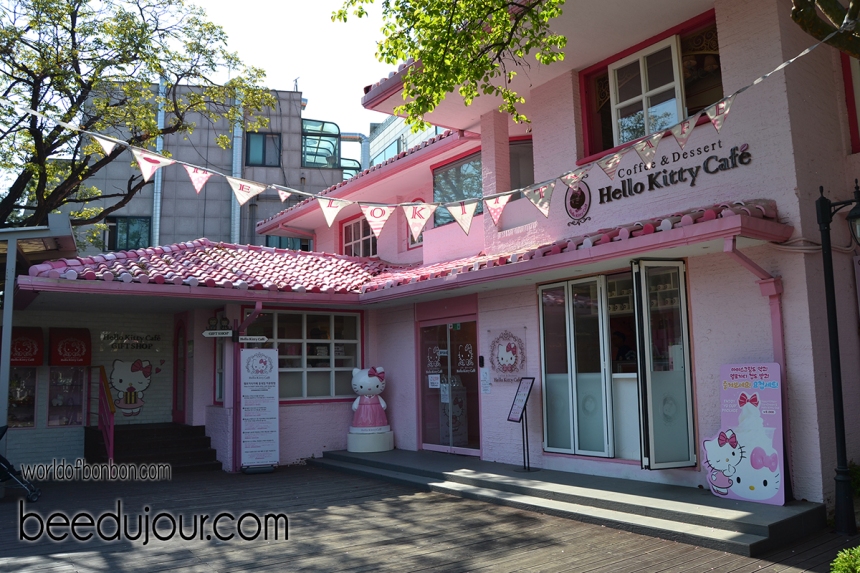 Think pink, pink, pink! Almost every surface was covered in Hello Kitty’s face or logo. The was a big emphasis on apples and small pictures from her cartoon series adventures. Some memorabilia were on sale too. However, the café was and is supposed to resemble a day in the world of Hello Kitty in her animated cartoon. Simple, bold designs in full 2-D colour, reminiscing to the sweet 1980s girly vintage look. 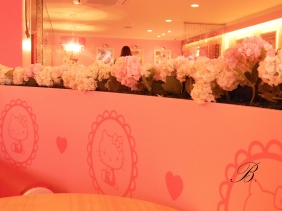 The wall and corners were all designed to create amazing photo opportunities for visitors.

The interior concepts and design are still the same just more spacious. It has two floors, and a interior bedroom design concept showing how to decorate your own room with Hello Kitty bedding etc.

There is also a separate gift shop in the café where you buy the latest merchandise and memorabilia. 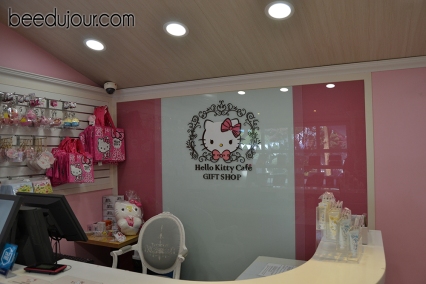 This is a café, so there wasn’t a serious menu. It showcases Hello Kitty’s personal love for sweet things and cakes. You could get a variety of small cheese cakes on different colours in the shape of Kitty’s head, offers with her head in the cream. 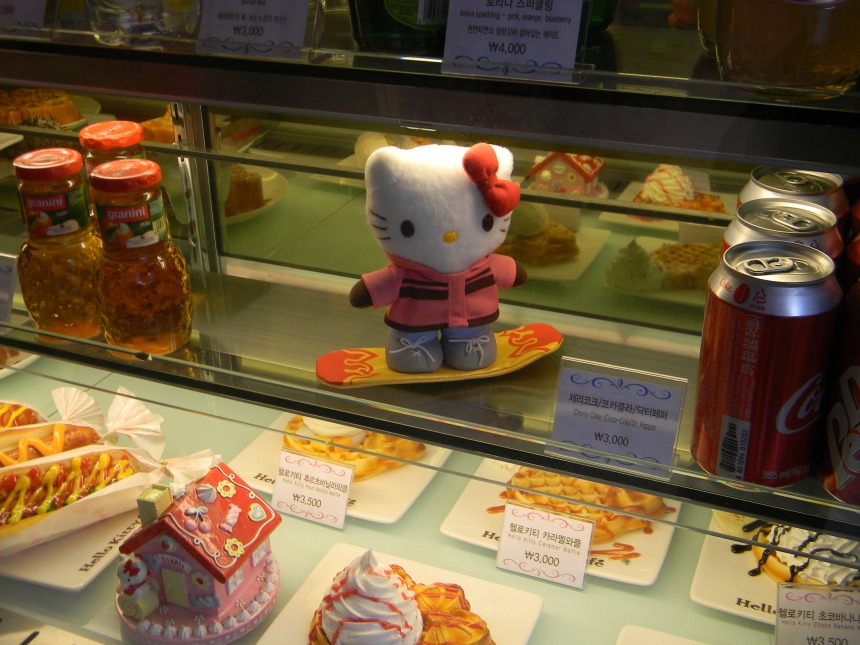 The focus is not the food here, but rather the experience of getting a slice of life of Hello Kitty. All this while sitting in her overly pink adorned and cushioned world surrounded by cuteness and sparkle.

Since its success from the first one in 2011, two more Hello Kitty cafes have opened in Seoul and on Jeju Island. It has also spread to other parts of Asia such as China and Taiwan and is a food truck concept in the U.S.A. It’s went beyond being a café concept.

Why Coffee with Kitty?

Coffee is more than a product and cafes are more than a place to buy coffee. Going to a café has become part of our lifestyle, it’s a social event and an experience. It’s a place to take a break and meet friends, so the art in café’s have developed over time. We go even if we don’t all drink coffee. 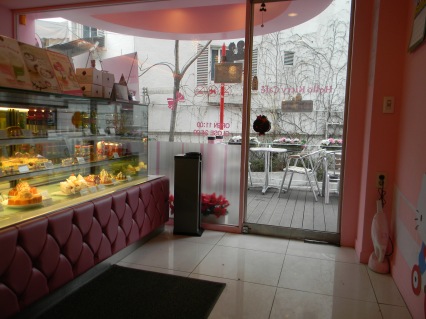 Café culture in Far East Asia, and especially in Korea is big. Local cafés competes with major brands like Starbucks etc. and have even gone on to surpass its popularity. Cafés are places to unwind and reflect and what better space to do it surrounded by your favourite character and their world.

Hello Kitty Café is for all ages, a anyone can come and relax in its unique atmosphere away from the bustle of the grey cityscape. Most grown up fans might not still want to indulge in buying Hello kitty goods, but would definitely opt for an experience as simple as drinking coffee. A combination of both regular life and fantasy and nostalgia where you relate with your character. Today, more character cafe’s have grown in Korea such as the popular Kakao Friends Cafe!

Follow Bee du Jour on WordPress.com
All photos, images, illustrations and art work are my own (unless otherwise stated) and are subject to copyright. You may use my images, but then please give the credit.
%d bloggers like this: