Jeju Island has been on my Korean bucket list for some time. The island’s popularity has grown so much over the past 5 years and it continues to be the perfect getaway destination. I finally decided to take a short weekend trip down South to the island to get a breath of fresh air and relax.

How to get there

Right now, you still need to take a flight to the island. The other option might be to take a bus down South and then a ferry, but that would take a full day!

Flights from within Korea are rather cheap, and the cheapest flights being in the weekday. You can get a flight from as little as KRW30, 000 ($30) from one of Korea’s local carriers. I went with Jeju Air. I was in luck too, as currently there was a political and economic dispute between Korean and China which led to all flights being banned between the countries. Chinese tourists currently constitute the largest percentage of tourists on Jeju. The lack of Chinese tourists meant that numerous specials arose and I took advantage of it!

I booked my flight in a month before, and made sure I went the weekend after the Children’s Day public holiday. As I was leaving on the weekend the ticket cost KRW 80,000 and I returned on the Monday which was lower and only cost KRW 30, 000, which meant a total of only KRW 110, 000 ($110).

Most local flights will leave from Seoul’s smaller airport, Gimpo which is easily accessible on Seoul Metro line 5 and 9!

Due to the lack of tourists, many hotels offered great discount specials. I stayed about 10 minutes from the airport, right by the beach and down the road from the centre. It was also conveniently located near all the major bus routes and stops to take you around the island. 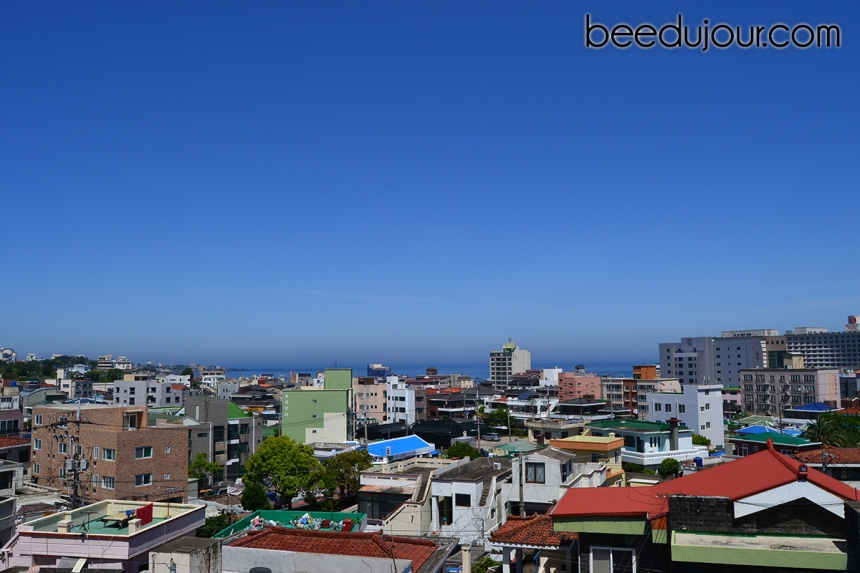 Getting around Jeju Island

Jeju’s transport system is not THAT convenient. There is no easy subway to conveniently drop you off. Most tourists rent cars during their stay, or if you are on a short and budgeted stay like me, you can travel like the locals and use the bus. The bus system was rather efficient and I had no trouble using it. It was on time and efficient.

I was sure to pick up a few maps before leaving the airport and got a nice bus route map on how to get around the island. Don’t be nervous about using the buses, the info at the stops and on board are in English and Korean.

Jeju is truly a breath of fresh air. The island is situated far south of the Korean peninsula in the Pacific Ocean. You will find the island surrounded by dark black rocks and some beaches with black sand as it is a volcanic island. The biggest volcano, Mount Halle lies in the centre of the island and can be seen practically from any view point. Mount Halle is in fact dormant, but the island is surrounded by numerous craters and caves which still contain lava. Mount Hallasan is also Korea’s highest mountain.

Seoongsan Ilchulbong or Sunrise Peak is volcanic crater or a tuff cone that lies on a shallow sea bed off the island. It is considered a UNESCO World Heritage Site due to the crater’s well preserved form and structure. The crater was formed 5000 years ago and still contain lava inside and it is a small hydro-magmatic volcano. The lava inside the tuff cone still erupts and causes holes to occur externally around the crater. Due to the embedded lava, the biodiversity if plants and sea life on and along the crater are tropical due to the mineral rich soil.

Well I decided that I only had 2 days on Jeju and so I must to do something with a beach and a volcano. I wanted to hike Mount Halla, but my time was limited and I was out of shape. Sunrise Peak was something I had to do.

I took a bus to the crater, and the ride offer some really good views of the island’s east coast, the bus tops right at the entrance so it was easy. You pay a small entrance fee of about KRW 2000 ($2) and you can start hiking up, go horse riding and go down to the beach and visit the famed women divers of Korea under the crater! 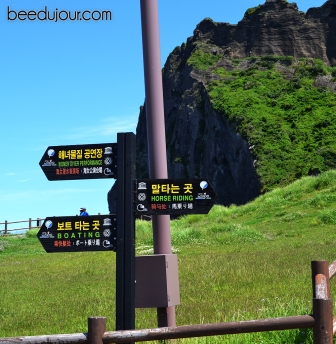 I took the hike first. The hike is steep, but not long at all. It’s only about 30 minutes up and there are plenty of rest stops and a nice bathroom along the way. 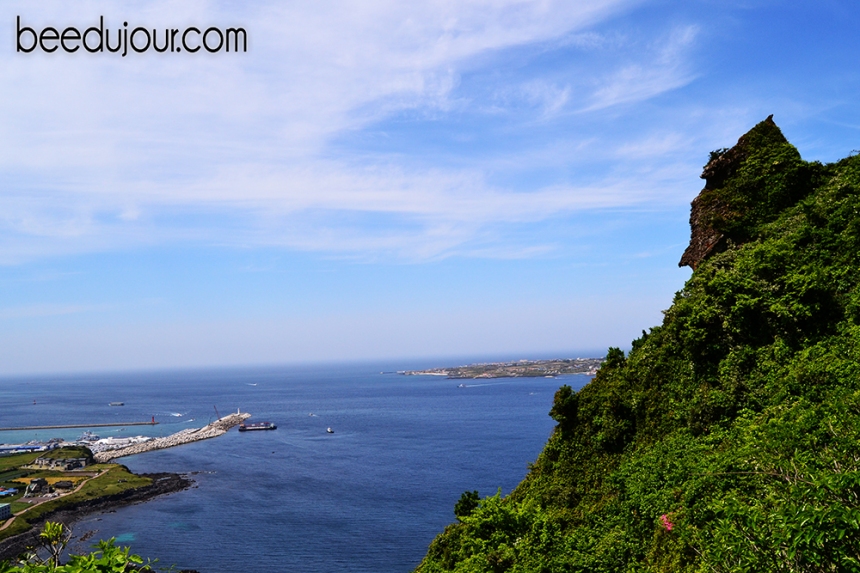 The views on top are really nice, and the crater’s core is covered in rich lush green grass and fauna.

On your descent from Ilchongbong, you will be led down a path that goes down to a small coastline. Here you will find Jeju’s traditional Haenyo (sea women) who go out every day into the ocean to fetch abalone and various other shellfish found nearby. 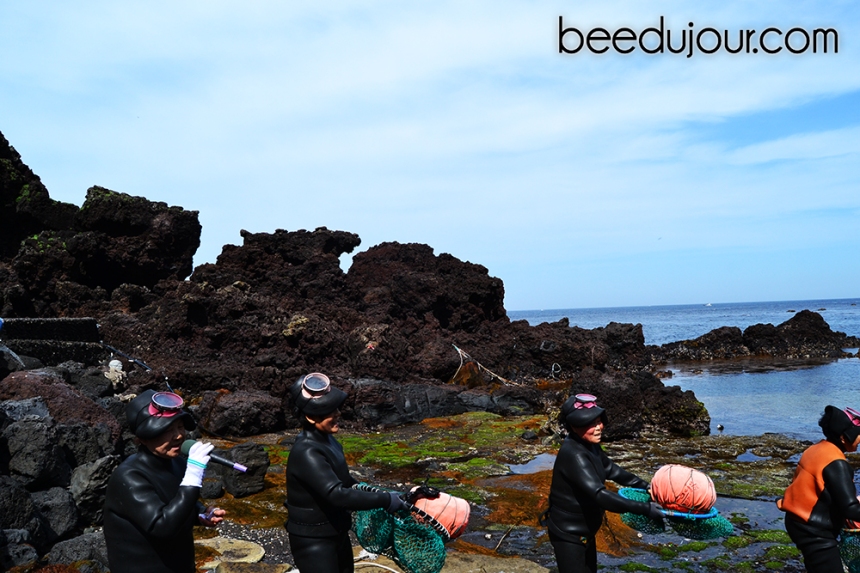 This is one of the only occupations that are female-dominated. The women are the bread winners while the men stay at home, raise children and do the daily chores. Originally, the men did the diving but many of the wives accompanied them and eventually dominated the fishing. There were also a higher number of deaths of male divers due to the cold temperatures, while it’s believed women had a high percentage of fat for insulation which led it to becoming a predominantly female job. 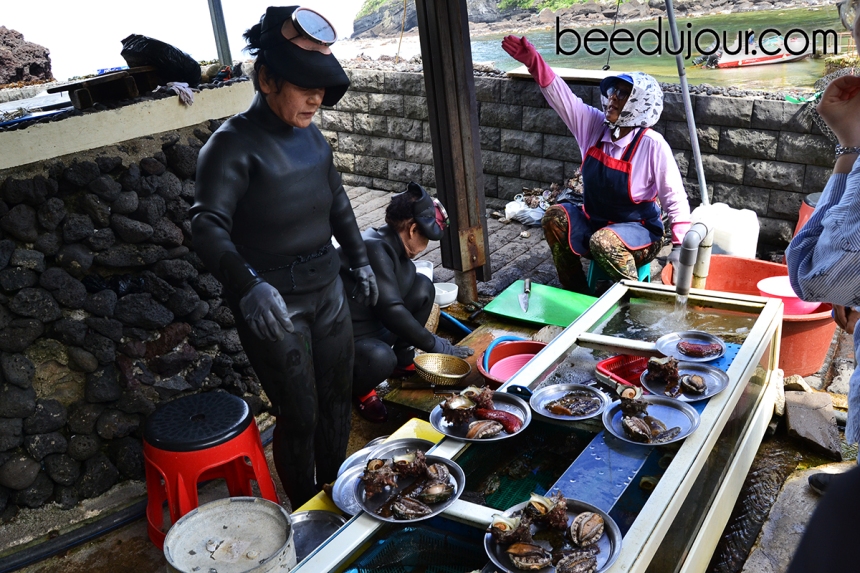 You can taste samples of their daily catch and watch their dive song which occur only twice a day. They perform the first at 12pm and second show at 3pm. I was in luck, I descended just in time to see the performance before heading out in the water. 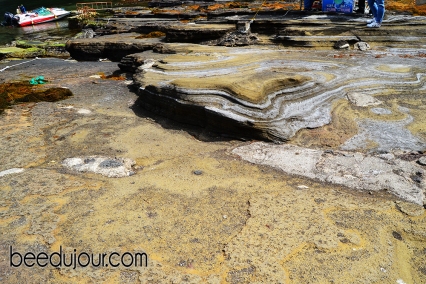 The beach where they are based was very interesting. A big reef dominated the shore while black and reddish rocks littered the beach.

I had to do a beach. A friend recommended Hamdeok Beach as being the most beautiful off the east coast. Luckily it was on the same route as Seoongsan Ilchulbong. I decided to stop over on my way back in the late afternoon. 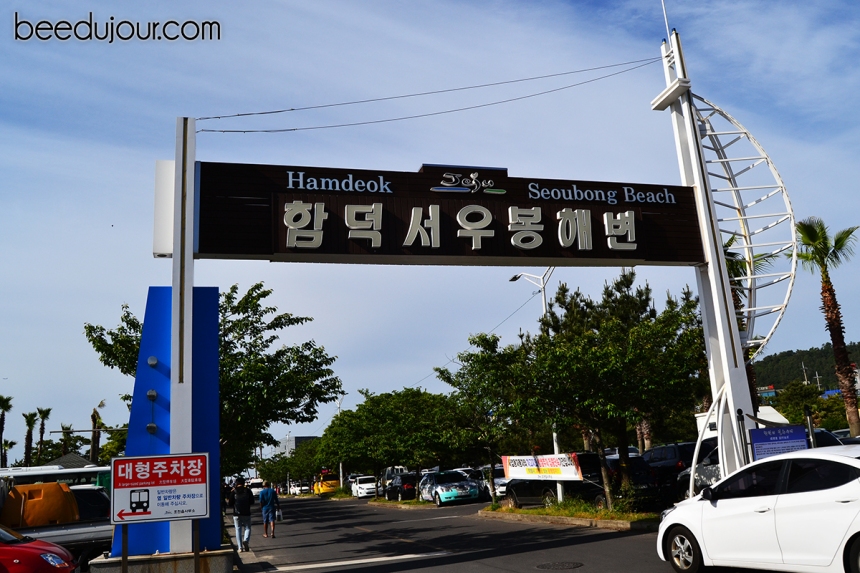 It was still rather cool on Jeju in early May, but I walked around took some pics and put my feet in the cold water. 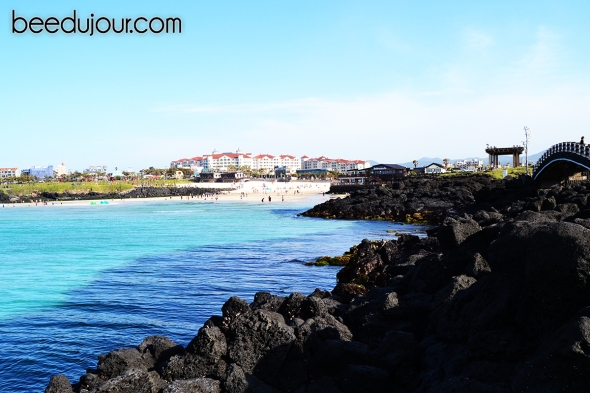 The beach is perfect cove with white sands and perfect blue waters for swimming. It has many cafes and restaurants along the boardwalk too. This is definitely a place to visit in the summer!

My Visit to Jeju Island

My stay in Jeju was short and sweet, but it’ definitely the perfect place for a short holiday in the summer if you are in Korea and on a budget. I think my easy stay can also be contributed to the lack of tourism that is abundant on weekends. There were no long lines, queues or any waiting during my stay. I’ve heard from fellow traveller that there are lines just to get onto a bus and it’s usually jam packed! 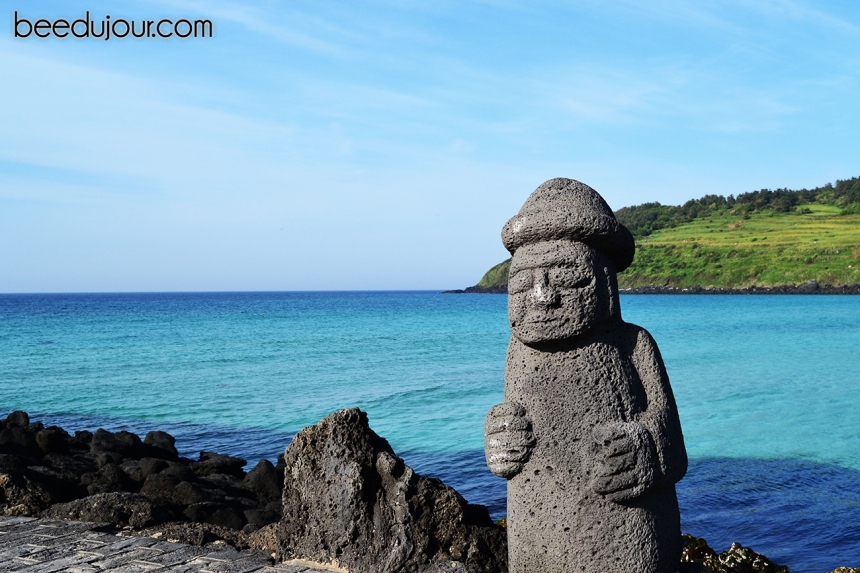 Green fields, blue seas and lots to explore Jeju is a must on to do list if you are in South Korea. I definitely want to return!

In my next post, I visit the new Hello Kitty Island complex on Jeju! This one is not to be missed!

5 Tips for Working with Social Media Influencers on a Campaign 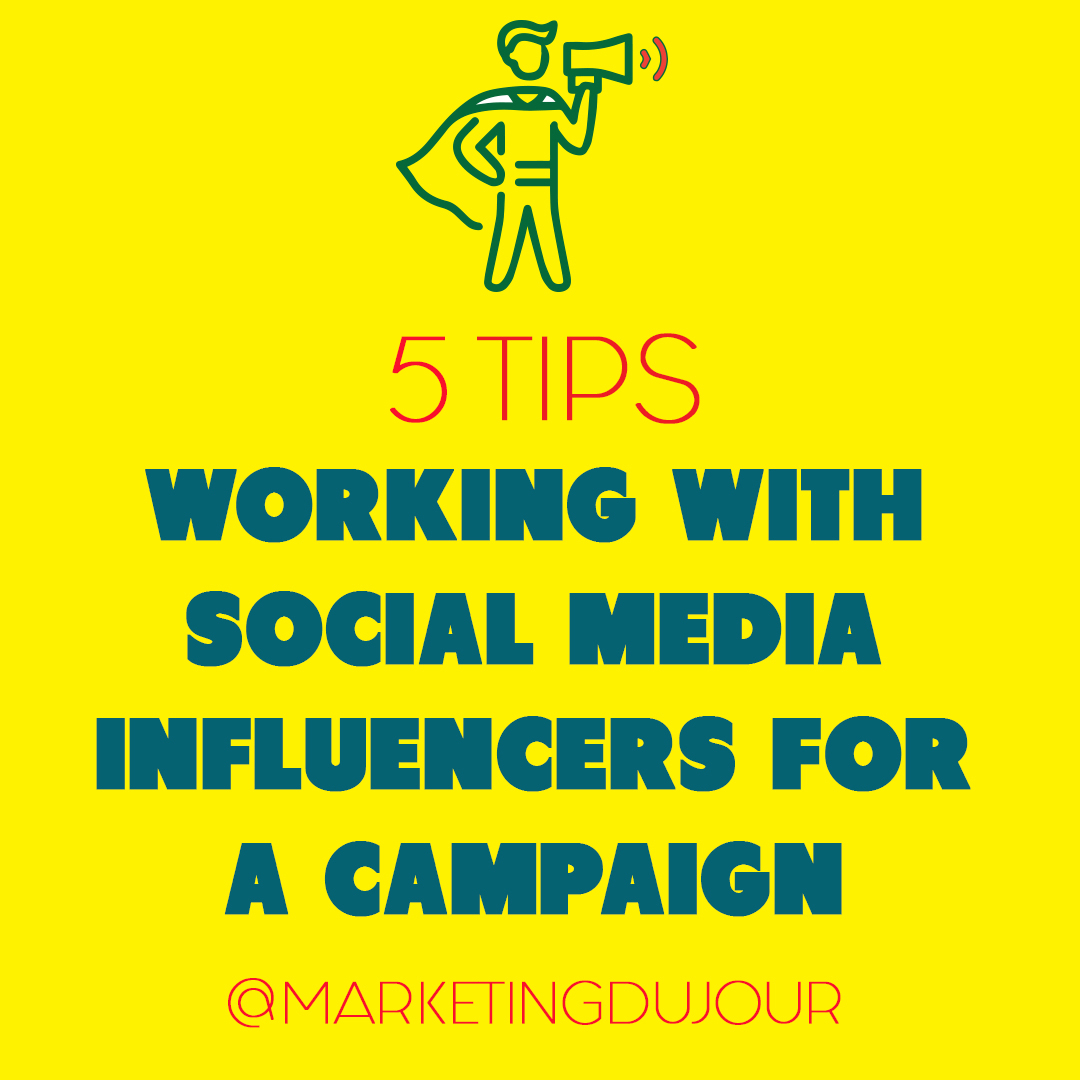 Social Media Influencers can truly leverage a brand/business to a whole new level. Regardless of your personal feelings of them, as a business you’ll need to take note of them as their value and voice can truly catapult your brand into the market! A month ago I finally built up the courage to work with […]

Follow Bee du Jour on WordPress.com
All photos, images, illustrations and art work are my own (unless otherwise stated) and are subject to copyright. You may use my images, but then please give the credit.
Loading Comments...
%d bloggers like this: